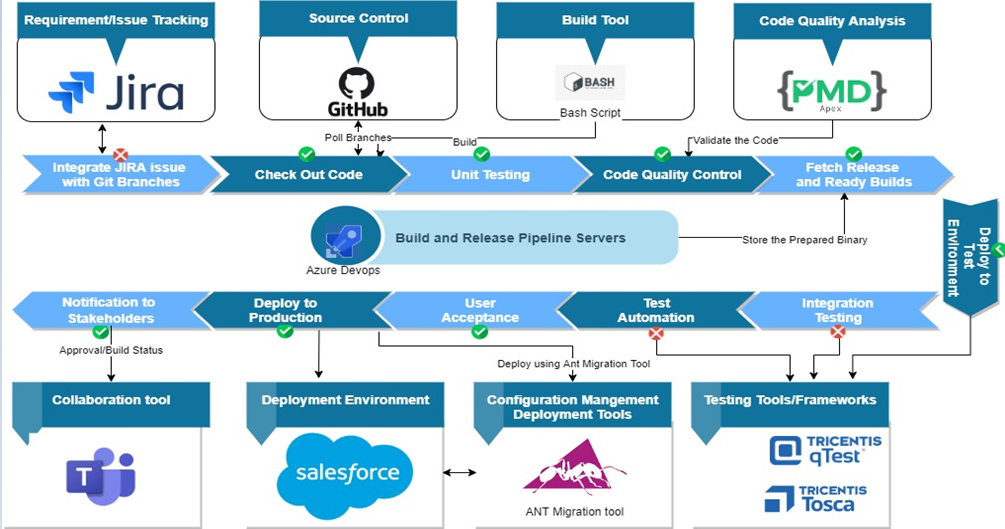 Agile teams are pretty successful in iterative development. Still, there is a considerable challenge in releasing iteratively and getting the changes out of the door to the excitement of the business users. There is significant scope for improvement, especially in coalescing responsibility end to end, not only just Development and Operations.

Licensed products like Copado, Gearset, auto rabbit, and many others can help but come with a license cost. Would you believe it is possible to have a “home-grown” solution with ZERO license cost but provides similar capabilities as given by a licensed product?

Initially, we focussed on CI/CD technologies to streamline the deployment processes for our internal tech teams. But we realized that the continuous integration and testing brought stability to our releases, thus boosting our confidence and shortening the turnaround time for the business.

Minuscule Technologies have been pioneering solutions for almost a decade in the CI/CD ecosystem with existing tools like Github, Azure DevOps, SFDX, and Shell scripts to make an “in-house” deployment framework and tools to

In a nutshell, we have built the solution starting from the JIRA boards for the requirements and leveraging Github to integrate source code versions, passing it through the Azure DevOps pipeline, using Shell scripts to facilitate application deployment with SFDX as the catalyst. We have also integrated the deployment process with collaboration tools like Microsoft Teams/Slack to notify and obtain necessary stakeholders’ approvals.

Reach out to Minuscule Technologies to automate your release management process.

Data Integrity crisis in your organization ?
Salesforce CI/CD implementation using Azure DevOps
Salesforce CPQ – Configure Price Quote
How will you know if your Commercial leases are competitively priced and profitable?
How to personalise CRM via Salesforce ?

We take pride in pride in providing quality delivery that our clients rely on.

If you are still unsure about whether to partner with us, we can help you make that decision. Simply leave your team’s biggest tech challenge in the text box below and we will find a solution free of cost. The decision, then, would be up to you – whether we are a good fit for your organization or not.

Thank you for your interest. Someone from our team will reachout to you.
Oops! Something went wrong while submitting the form.